Traveling around San Francisco by car can be a real challenge for visitors and residents alike. Traffic goes fast, people switch lanes like flies zig-zagging from point to point, and one-way streets are prevalent. Bicyclists, buses and pedestrians all share the road, and those enormous hills can be quite daunting, especially if you're driving a stick. Here are some tips for driving in the City by the Bay, so you can navigate the picturesque streets safely and securely.

Map Out Your Route

Before heading out, make sure you map out a route to your destination. If you're starting in the city, you might not necessarily want to take the most direct route because you might end up stuck behind a Muni bus or caught in traffic.

Plan alternate routes that don't take you far out of your way. You can rely on one of these alternates if your route of choice gets messy. Even though San Francisco is only seven square miles, there's a lot packed into those streets. Be prepared for anything.

Digital maps or printed maps are both handy, so be sure you bring them along. Traveling with another passenger who can help you navigate also helps.

Street signs are your friend in San Francisco. They will tell you if:

The last thing you want is a moving violation for failing to read a street sign, so keep your eyes peeled. 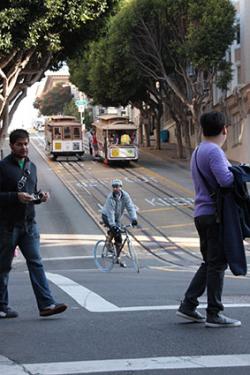 San Franciscans love to ride their bikes, and they're out commuting on their bikes all over the city. There are also bike messengers who race through the city streets like speeding bullets.

While there are ample bike lanes on city streets, it's important to:

San Francisco is a walking town. Trying to cross an intersection or turn right onto a busy street can be a challenge when you're dealing with pods of people who are also trying to cross. Always yield to pedestrians and make sure they are out of the crosswalk before you begin to drive through it. They have the right of way under the law in marked and unmarked crosswalks.

Be aware that jaywalking is part of the culture in San Francisco. Yes, it's illegal, but everyone does it. You'd be better off yielding to a jaywalker than assuming he or she will yield to you. Try to avoid driving through the Financial District during commute times because you may never get through an intersection due to the massive amount of pedestrians heading to or from work.

Watch Out for Muni 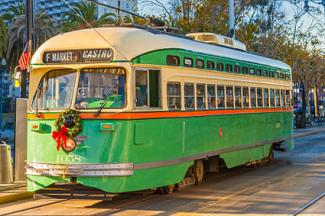 Muni is the public transit system of buses and light rail in San Francisco.

While Market Street can be a tempting destination for any driver, it is really difficult to navigate and next to impossible to turn. This street is often littered with pedestrians and cyclists, and traffic from Civic Center to Embarcadero moves very slowly. The higher end of Market Street, past the Castro District and up into the hills where it turns into Portola, will give you a nice view of the city. However, taking an alternative route around Market Street may make it easier to reach your destination.

Take Back Roads or Major Arteries

There are two trains of thought for driving in San Francisco. Either one may save you some time and/or frustration.

If you're driving in the wee hours of the morning, you might have the best luck taking the arteries and timing the lights. During busy times, it is often better to seek out back roads, short cuts, or long cuts in order to reach your destination without hitting traffic, throngs of pedestrians, and cyclists commuting to and from work.

Since San Francisco is a mostly grid-like street layout, driving along parallel streets with less traffic can be a good option. If you're driving from one end of town to the other, starting off on a major street and winding your way around if it gets too busy is another option. Or, if you really don't care about sitting in traffic and just want to drive for the experience of finding a direct route, by all means, try the major roads like Mission Street, California, Geary, Van Ness, Oak and Fell.

Driving Up Those Hills 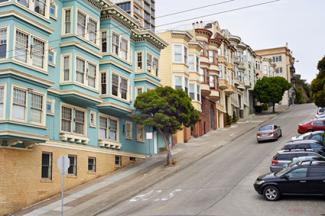 If you're not used to scaling one of those incredible inclines for which San Francisco is famous, there is a little trick to it. It's usually better to drive faster rather than slower.

If your car has an automatic transmission, you might have an easier time of managing the hill because you won't stall out. However, it will be important for you to gain enough speed leading up to the hill so that you can climb it and not destroy the engine.

If your car has a manual transmission, which involves operating a stick shift, you'll want to go fast enough to shift into at least second gear to climb a steep hill and maintain your speed so you don't stall. There are many stop signs on these long, steep hills, and you don't want to roll back and hit the car behind you as you attempt to leave the stop sign. An automatic transmission makes this challenge a little easier, but with a stick, you might want to use your parking brake until you've balanced the clutch and gas so you know you'll move forward rather than backward.

Parking on a Hill

Parking on a steep hill can be a test in physics, but the main rule to keep in mind when parallel parking is to turn your wheels away from the curb when you're facing uphill. If you're facing downhill, turn your wheels toward the curb. That way the wheels will stop the car from careening down the hill if your parking brake fails.

South of Market and Financial District

If you need to drive through this part of town, notice that Market Street messes up the true grid pattern of the city. Market Street delineates the Financial District and Union Square to the north from the South of Market (SoMa) district to the south, and it skews the pattern of the grid.

If you must navigate this area, notice that most of the streets go in one direction, are very congested, and will take some time to get through. South of Market streets run in a diagonal to the east-west pattern of the rest of the city since they run northeast and southwest.

There are also several freeways that run through SoMa that can throw off your game, as well. Pay attention to the street signs so you don't end up heading east on I-80 and going to Oakland rather than going to the Moscone Center on Mission Street. Don't by shy about pulling over to a curb to reorient yourself if you feel like you've entered the Bermuda Triangle.

San Francisco feels like an island in many ways, although it's only surrounded by water on three sides. There are two major bridges; the Golden Gate runs north and south, and the Bay Bridge runs east and west. Once you descend one of these bridges into the city, freeways dissolve into city streets.

Interstate 80 starts downtown and heads east over the Bay Bridge into Oakland. It then heads cross country to the East Coast.

If you're getting on I-80 from the city, head down Bryant Street in SoMa and choose from a number of on ramps. If you accidently get onto I-80 going east and don't want to head in that direction, your chance to turn around is at Treasure Island, which is about halfway across the San Francisco Bay.

There are no tolls for drivers heading eastbound out of the city. Heading westbound into the city, you'll need to pay between $4 and $6, depending on the time of day.

Interstate 280 offers a handy way to skirt the southern end of the city, unless there's traffic, so check that traffic app. Take I-280 to destinations in the Mission District, Mission Bay, Portrero Hill, Silver Terrace, Excelsior and India Basin. As I-280 meets up with Highway 1, you'll be near San Francisco State University and the Outer Sunset District.

I-280 continues south of the city into the western half of the peninsula. It can be a great route to the airport. Just use the short I-380 East crossover to 101 South, and continue straight to SFO. There is no toll. 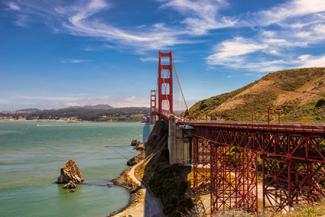 Highway 101 practically disappears into city streets in San Francisco, but it is still marked so you can make your way from the southern end that exits in the Mission District. Continue north on Van Ness, and then turn left on Lombard and follow the signs. Reverse this path when you head south through the city.

Look for signs saying 101 North. From the north, it's easy to get onto the Golden Gate Bridge if you're on 101 already. Just head south and be prepared to pay the toll at the southern end of the bridge, which is about: $6. There is no toll for northbound drivers.

Highway 1 is a scenic and winding road that stretches nearly the entire length of the Golden State. Most of highway 1 is on the coast, which offers drivers the opportunity to catch breathtaking views of the Pacific Ocean from San Diego to Mendocino County.

In San Francisco, Highway 1 turns into 19th Avenue in the southern half. After winding through Golden Gate Park, it switches to Park Presidio Boulevard and leads to the Golden Gate Bridge. There's no toll.

Parking can be torturous in San Francisco. It's either virtually nonexistent or very expensive. That's one reason why people don't like to drive in the city. Parking in a garage can cost as much as $50 a day, depending on which garage and which part of town you're in. Meters are about $2 an hour.

If you want to park on the street:

Don't feel bad about having to park several blocks away from your destination because nearly everyone does it at one time or another. Just make sure you leave extra time to look for a parking spot, park, and then walk to where you need to be. Don't leave valuables in your car either because break-ins are common.

For many San Franciscans, driving is a last resort since there are plenty of public transportation options, and the city is so friendly to bicyclists and pedestrians. However, many people do drive in the city every day, and most come out of it unharmed. Just do your best to look out for pedestrians and all other travelers, regardless of their mode of transportation, and pay attention to street signs and parking signs. Above all, don't expect to get anywhere in a hurry, and you'll be alright.