San Francisco Bay is one of the best places in California to go whale watching. While the types of whales you can see may vary based on the season, it is an activity that you can partake in most of the year. Take a guided boat tour or keep watch from the shore - you might spot one at any time if you're in the right spot and very lucky.

Whale watching boat tours are quite popular, as they provide a knowledgeable guide and a great chance of seeing wildlife. Several tours leave from San Francisco and head to the Farallon Islands, which are 27 miles off the coast, via the Gulf of the Farallones National Marine Sanctuary. Recommended whale watching tours out of San Francisco Bay include:

Check websites like Groupon for potential discounts, and/or research tours that promise a whale sighting or you get another cruise for free. 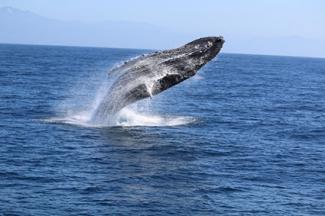 There are two basic whale watching seasons in San Francisco Bay. While there's definitely no guarantee you'll spot one, the chance of spotting one is definitely greater during the right time of the year.

Point Reyes, in the northwest of the San Francisco Bay area, is generally regarded as one of the prime areas to catch migrating California Gray Whales. Because the Point Reyes peninsula juts out 10 miles into the ocean, it makes for a prime viewing spot from shore. In this area, the National Park Service recommends the areas around Chimney Rock and the Lighthouse for whale watching. During peak migration time, there will be a mandatory shuttle bus system operating to help alleviate the high volume of traffic. Call 415-464-5100 (x2, x3, x1) to check the 'Shuttles, Whales, and Elephant Seals' recording for updates.

According to Visit California, San Francisco's Pier 39, Half Moon Bay, and Santa Cruz are other areas in and around San Francisco Bay that are prime whale watching spots. You can drive along the coast and find your own spot as well -look for areas that are high up and jut out into the sea. Calmer days with fewer whitecaps will help you spot a whale's spout, so look carefully if you're going on your own.

If you're planning a trip around March, look into the Mendocino Coast Whale Festival. North of San Francisco Bay, Mendocino is a very popular spot to see migrating whales right from town. The annual festival includes local seafood, wine and beer tasting, docent-led whale walks, art exhibits, and a 'Whale Tales' exhibit at the Ford House Visitor's Center. It's a great festival if you're itinerary allows.

The weather can sometimes be unpredictable in San Francisco, so be sure to pack properly. Point Reyes is considered the windiest place on the Pacific Coast, and the second foggiest place in North America. The marine layer, or fog rolling in, can make even the summer months take on a chill. Bring a lightweight jacket, and if you're visiting during the rainy months like February or March, pack your rain gear.

Because of the high winds that whip the coastline, you should definitely pack seasickness medication if you are prone to motion sickness at all and plan to venture off dry land. Also, on days with very heavy winds, the choppy seas could cause some companies to cancel their boat tours for the safety of all guests.