At 5:04 p.m. on October 17th, the 1989 San Francisco earthquake struck the greater Bay Area. The 6.9 magnitude quake, more widely known in the Bay Area as the Loma Prieta Earthquake, was the largest to strike the region since 1906.

The quake occurred during a World Series baseball warm up between the San Francisco Giants and the Oakland A's. Although Candlestick Park sustained no significant damage, media outlets in town to cover the game made the quake and its aftermath one of the most televised geologic events in recent history.

Although the quake caused limited loss of life due in part to stringent building codes in force at the time, serendipity played a part too. Because both World Series teams were local, rush hour traffic on October 17th was lighter than on an average workday. Many sports enthusiasts left their jobs early to catch the game or took the day off to enjoy the event. As it turned out, this was a very good thing.

Two catastrophic motorway failures occurred during the quake, one when a 50-foot length of the upper deck of the Oakland Bay Bridge crashed to the deck below, and the second when the double-decker Interstate 880 Cypress viaduct collapsed. The collapse of the Cypress structure alone caused 42 of the 67 deaths reported in the 1989 earthquake.

Under development when the quake struck, another casualty was the Embarcadero Freeway project. Running along the waterfront, this controversial project was scrapped as unsalvageable and replaced with a lower profile boulevard. Other roads that sustained enough damage to be closed for a significant period were: Interstate 280, State Route 17, and U.S. Route 101.

The San Francisco Marina District was one of the hardest hit in the quake. Built on sand and landfill, some of it from the 1906 quake, the area's soil composition was naturally porous. The porous soil interacting with a high groundwater content amplified the shaking, undermining the integrity of the terrain through a process called liquefaction. Multiple fires were caused by a gas main rupture on the intersection of Divisadero and Beach Streets, and a subsequent hydrant system failure exacerbated the problem. There were five reported deaths. 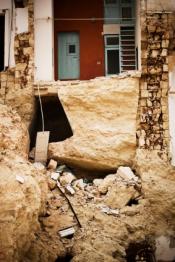