As one of America's most iconic symbols, the Golden Gate Bridge was a major engineering feat of its time. Today, from all over the world, visitors flock to San Francisco to walk across the nearly 9,000-foot suspension bridge and stand high above where the Pacific Ocean meets San Francisco Bay.

History of the Golden Gate Bridge

Despite the Great Depression, bridge engineering firms across the US submitted 11 different final proposals in 1930 for this giant public works project. For Chief Engineer Joseph B. Strauss, his winning design was a graceful improvement on "an upside-down rat trap" first submitted in 1921.

Funding primarily came from a local bond issue approved by popular vote. Celebratory parades and fireworks marked the event after local citizens in six counties overwhelmingly supported the $35 million construction project by agreeing to put homes, farms, and businesses up as collateral.

On May 27, 1937, an estimated 200,000 people paid a quarter each to cross the bridge on foot. The following day, President Franklin D. Roosevelt opened the bridge to cars via a telegraph key signal from the White House.

At the time of its construction in the mid-1930s, the Golden Gate Bridge's 1.7-mile length made it the longest suspension bridge in the world. It maintained this position for nearly 25 years until New York's Verrazano Narrows Bridge opened in 1964. Even today, this historic San Francisco landmark holds its place as the nation's second longest suspension bridge, a bold monument to the human spirit and ingenuity.

The bridge is built entirely of American-made steel from plants in Pennsylvania, New Jersey, and Maryland. The carefully timed dispatch of steel sections by rail from Philadelphia were carried by ship through the Panama Canal. 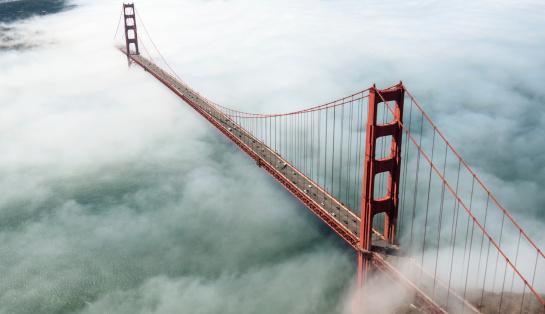 The Golden Gate Bridge was dubbed "the bridge that couldn't be built" because its construction seemed nearly impossible. The mile-wide Golden Gate Strait flows with strong tides and currents in water over 300 feet deep in the center of the channel. Strong winds and thick fog further complicate matters.

Despite the drawbacks, engineer Joseph Strauss was named to lead the project. Construction began in late 1932 and by its completion in May 1937, costs tallied $35 million. According to the CNN Library, the stunning Art Deco-style bridge was completed ahead of schedule at $1.3 million under budget.

Some experts believe that construction of the bridge, which would cost $1.5 billion in today's dollars, may not even be possible today.

Construction of the Golden Gate Bridge cost 11 lives, considered a record safety accomplishment. As an innovative precaution, a huge safety net was installed under the bridge during construction to catch workers who lost their footing. Ten of the 11 fatalities occurred in a single accident when a work platform fell through the safety net. The netting saved the lives of 19 men, thereafter known as members of the "Halfway to Hell Club."

In the spirit of safety first, Strauss insisted that bridge workers wore construction hard hats, modified from a design used by miners. Other safety innovations included non-glare goggles, sun and wind protection cream, a sand blast respirator, and even a special diet to combat dizziness.

Whether shrouded in fog or standing out against bright blue sky above and water below, the bridge's signature color was actually an accident. The reddish-orange was only meant as a primer coat. Grey, black, or silver were the traditional choices for large bridges. When consultant architect Irving Morrow received letters of support from residents, a vermilion to match the primer won out as the color of choice, now known as International Orange.

Inspired by the Golden Gate

In Portugal's capital city, the Ponte 25 de Abril suspension bridge completed in 1966 is Lisbon's striking lookalike of the Golden Gate Bridge, right down to its color. Lions Gate Bridge, a suspension bridge visible from downtown Vancouver in British Columbia, bears a strong resemblance to its San Francisco cousin of a similar 1930s era too.

A Marvel of Modern Engineering

The Golden Gate Bridge has stood the test of time and weather. In 1989, it held strong against the forces of the Loma Pieta earthquake. This majestic landmark painted in signature International Orange is thought to be the most photographed bridge in the world. The American Society of Civil Engineers named the Golden Gate Bridge to Monuments of the Millennium as one of the top 10 "civil engineering achievements that had the greatest positive impact on life in the 20th century."

Millions of reviews on TripAdvisor earned it a Travelers' Choice Award as the top US landmark in 2016. If you're walking or biking across, pause at the National Park Service Welcome Center on the south side to see a statue of Joseph Strauss and plaques dedicated to the 11 workers lost, as well as citations from the American Society of Civil Engineers.

Comments
© 2006-2021 LoveToKnow, Corp., except where otherwise noted. All Rights Reserved.
Importance of the Golden Gate Bridge