Built for vaudeville shows in the 1920s, the Orpheum Theater, San Francisco, remains one of the city's major performance venues. Together with the Curran Theater and Golden Gate Theater, the Orpheum presents SHN's Best of Broadway series, bringing world premieres, hit musicals and award-winning plays to San Francisco each season.

Inside the Orpheum Theater San Francisco

In its 80-plus years, the Orpheum Theater has hosted everything from vaudeville acts to motion pictures to musical comedy. Today, it serves as a flagship theater for Shorenstein Hays Nederlander (SHN) and regularly debuts West Coast premieres by national touring companies. A few past productions that have called the Orpheum "home" include The Lion King, Phantom of the Opera, and as of January 2009, the welcomed return of Wicked.

The theater's ornate design is well known and unmistakable. If anyone asks you about the city's Spanish-styled theater, you can rest assure they mean the Orpheum. Built by impresario Alexander Pantages (1867-1936), the theater was inspired by a real 12th-century Spanish cathedral.

Gold and red dominate the auditorium's plush interior, which also features a number of artworks of Spanish folklore. Once seated you'll want to look up at the ceiling and its centerpiece, a magnificent ring of full-bodied lions. As for the amber tint, the soft light that illuminates the theater before each showing only enhances the evocative ambiance.

No matter where you sit in the Orpheum, you should see and hear a good show. The theater's renovations (in 1981 and 1998) have made it a better fit for Broadway productions, in particular musicals, by improving the acoustics throughout. That said, tickets are generally the same price for Orchestra, Loge and Mezzanine, while Balcony seats are available at about half the price.

Shows at the Orpheum

Typically, shows are scheduled for two- to six-week engagements. However, there are exceptions, such as when The Lion King first premiered or when Wicked returned to S.F. in early 2009. Other major titles that have graced the Orpheum stage include:

Part of the SHN Family

Since 1978, SHN has been bringing the "Best of Broadway" to San Francisco. In 1981, the Orpheum joined the family and was reborn. That first year, it underwent a $25-million renovation in order to become SHN's main venue for "spectacle" musicals, such as Miss Saigon, Phantom of the Opera, and The Lion King. As SHN put it, "The show itself had become the star" and the Orpheum was to be the presenter.These days, the Orpheum continues to showcase major musicals and has become a theatrical destination for both locals and visitors alike. As a historic landmark, the theater itself is an attraction. In fact, San Francisco City Guides offers a walking tour all about the S.F. theater scene, which of course includes SHN's three historic venues.

The Orpheum Theater San Francisco is officially Landmark No. 94 on the city's register. It was so designated on July 9, 1977 - 51 years after its debut. Located in the Tenderloin District and within the Civic Center neighborhood, the theater is a major attraction along San Francisco's Market Street thoroughfare. 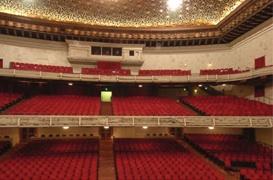 To new visitors, it may be surprising to find that the gilded Orpheum Theater's surroundings are rather "seedy" by comparison. However, it should also be noted that the area is very busy, so you should feel safe in that respect. The theater crowd tends to walk together as a group to the BART/Muni station and parking garages.

0
Comments
© 2006-2020 LoveToKnow, Corp., except where otherwise noted. All Rights Reserved.
About the Orpheum Theater San Francisco