The Giants -- the New York Giants -- were one of the first baseball franchises. Established in 1879 as rivals to the American Leagues' New York "Metropolitans" (today's Mets), the early Giants players included some of the game's most fabled players, such as Casey Stengel, Jim Thorpe, Christy Mathewson, and later, Willie Mays. The New York Giants won five World Series Championships and seventeen National League Pennants before moving to San Francisco in 1958.

The San Francisco Giants broke one of baseball's racial barriers in 1981 when the team signed Frank Robinson as their manager. Robinson's four years as manager were not stellar, but he paved the way for many an African-American manager. 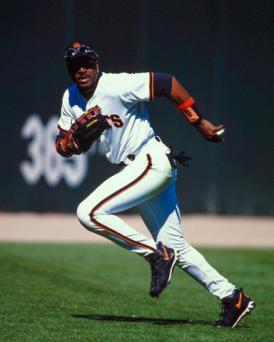 Most recently, the San Francisco Giants are best known as the home of Barry Bonds. Signed by the Giants in 1992, this son of baseball all-star Bobby Bonds (and godson of Willie Mays) is considered by many to be one of the sports all-time best players. He's hit more home runs than all but Hank Aaron and holds eight Golden Glove (defensive) awards, the most ever for a third baseman. Bonds greatness is not without controversy. He has been widely accused of enhancing his performance with steroids and other drugs banned by major league baseball. The outcome of this controversy remains to be seen.

The San Francisco Giants were one of the first original baseball franchises to move their team out west in the 1950s. Along with their hated rivals the Brooklyn Dodgers (who became the Los Angeles Dodgers), the Giants' moved west in 1957 as major league baseball became a coast-to-coast industry. While many of the original New York Giants fans resented the move as a betrayal, the Giants quickly adopted legions of new fans in San Francisco who were eager to cheer on their own hometown baseball team. The Giants original San Francisco home was on the corner of 16th and Bryant at the old Seals Stadium. In 1960, the Giants moved to Candlestick Park for forty foggy years before the current jewel of a stadium was opened on the shores of China Basin in 2000. 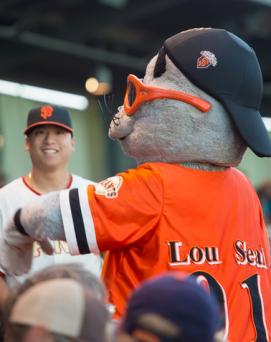 In an effort to maintain as much of the team's identity as possible during the move, the new San Francisco Giants made minimal changes to their logo. An S and F written in a similar font replaced the N and Y on the team's cap. The team's colors remained orange and black, and the logo used in promotional materials, a baseball with the word Giants written over it in cursive, remained unchanged. The promotional logo has gone through evolutions that reflect the changing styles of the times. In the 1970s, the white baseball behind the Giants name was changed from white to orange, and in the 1980s a bolder, uppercase type font replaced the cursive Giants from the earlier logo. Through it all, the S and F on the team's cap have remained a constant, although in minor league play and on special occasions throughout the season, the team plays with caps displaying a cursive G that harkens back to the old promotional logo.

The team's mascot is "Lou Seal", a large gray seal. The name, a play on "Lucille", honors the San Francisco Seals, the legendary Pacific Coast League (PCL) team which played at several venues in San Francisco until 1957, as well as Lou Brinson, a longtime Giants equipment manager who was killed in a Spring Training traffic accident in the 1970s. The Seals' last venue was Seals Stadium where the Giants played their first two seasons. Lou Seal appears at all home games. 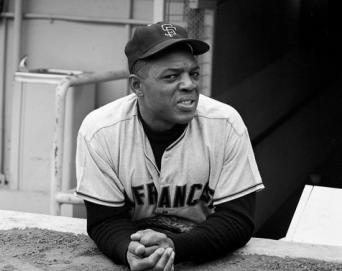 The Giants have sent fifty players to the Baseball Hall of Fame, more than any other major league franchise. Most of these hall-of-famers, however, come from the New York days. Among the Giants inductees are:

The Giants play in downtown San Francisco in AT&T Park, their tenth home since the franchise was created. The modern field, located in the "South of Market" (SOMA) district, replaced Candlestick Field, a sometimes windy field located on the edge of San Francisco Bay. AT&T Park, which sports a life-size statue of Willie Mays, is easily accessible from all over the Bay Aea, via BART trains and busses. Tours of the field are offered every day at 10 am and 12:30 pm, except on game days, and feature the press box, the practice field, luxury suite, bullpen, and home and visitors clubhouses.

Tickets for home games run from affordable bleacher seats to not-so-affordable, but with a great view of the field, infield club level seats. Facilities at the park including ATM machines, a wide variety of concessions, a full-service restaurant, and several team shops.