The author says: ''While the Ferry Building is arguably the most famous of our classic buildings and the Transamerica Pyramid the most noted modern building, the Call Building, also called the Spreckels Building, marked an era when San Francisco was undergoing a major transformation. The city had earned its reputation as a world-class city, leaving its frontier persona behind. San Francisco strove to be best with the finest hotels, the ultimate cuisine and buildings that reflected new wealth and power. The Call Building's design and construction raised the stakes."

Claus Spreckels owned the Hawaiian Commercial and Sugar Company, later renamed Spreckels Sugar. In addition to controlling Hawaiian sugar, Spreckels bought up huge tracts of land in California to grow sugar beets. Dominating the sugar industry until 1905, the new C&H co-op broke his monopoly. Adolph, Claus' son eventually had control of the Spreckels fortune. He married "Big Alma" de Bretteville, who stood as the model for Victory atop the Dewey Monument currently located on Union Square.

The San Francisco Chronicle, and specifically Michael de Young, vilified the Hawaiian Commercial and Sugar Company in 1884, stating that their sugar plantations were little more than slave camps. Protecting the family honor, Adolph shot and wounded M.H. de Young, a crime for which he was acquitted.

Who designed and constructed the Call Building - San Francisco? 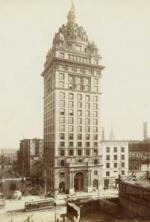 Each floor consisted of a series of steel polygons designed to resist stress and distortion from any angle. Filled with concrete, these polygons defined the eight bays of interior for each floor. The vertical steel girders in the columns connected to the floors with knee bracing, each connected to the next by diagonal X-braces of steel rods. The rods included turnbuckles for stress tuning, maintaining absolute plumb. Strobe used every structural trick in his bag to strengthen his structure. The building was clad in sandstone and the interior finished in white marble.

How would you describe its original design?

The ornate terra cotta dome and its associated corner cupolas defined the architectural style - baroque. That style exemplified the sense of royalty, permanence and power that Spreckels sought and gave San Francisco its first skyscraper.

What was the Spreckels Rotisserie?

Located on the fifteenth floor, the Spreckels Rotisserie boasted some of San Francisco's finest cuisine. "Dining in the clouds" invited tourists and San Franciscans to see the city from a unique vantage point. Spreckels hired the finest chefs to preside over the restaurant's kitchen. Huge letters on the outside of the fifteenth floor proclaimed "CAFÉ," a serious understatement. Open from 7 a.m. until midnight, a full seven-course dinner with wine came at a cost of one dollar.

What was in the dome?

The first two floors of the dome were reserved for meetings of the San Francisco Club. The sixteenth floor base of the dome housed a private dining room finished in marble, glass, bronze and mahogany, hosting up to 200 guests. The seventeenth floor was reserved for meetings, with folding doors that could wall off meeting rooms or completely open the floor. Adolph Spreckels served as president of the San Francisco Club.

The Reid brothers occupied the eighteenth floor with twelve porthole windows providing a panoramic view of the city. There was actually a nineteenth floor, but it only provided storage and access to the Call Lantern - a red light that signaled an Extra edition was imminent.

Did the Call Building survive the 1906 earthquake and fire?

The structure fared well, but the intense heat of the fires surrounding the building after the earthquake shattered the windows on the third floor, igniting the wooden, paneling, trim, furniture and anything else that would burn including paper. A fireball ensued blasting up floor by floor through the elevator shafts until it exited the dome. The smoke and flames darkened the sandstone and marble and some pieces shattered. The terra cotta broke in place as well. Structurally, the Call Building remained sound and was refurbished, not rebuilt.

Is the Call Building still standing? How has it changed?

The Call Building still stands and is now called Central Tower, a name as nondescript as the building. After purchasing the Call Building, Albert Roller learned that the structure could easily support six full stories above the fifteenth floor. He demolished the "uneconomical" baroque dome in 1937; replacing it with a new structure in the moderne style we now call Art Deco, modifying the entrance, lobby and elevators with the classic art deco adornments, initiating our building into the modern age of Metropolis. The current structure is a treasure to aficionados of that style, but the city lost sight of one of its most recognizable landmarks.